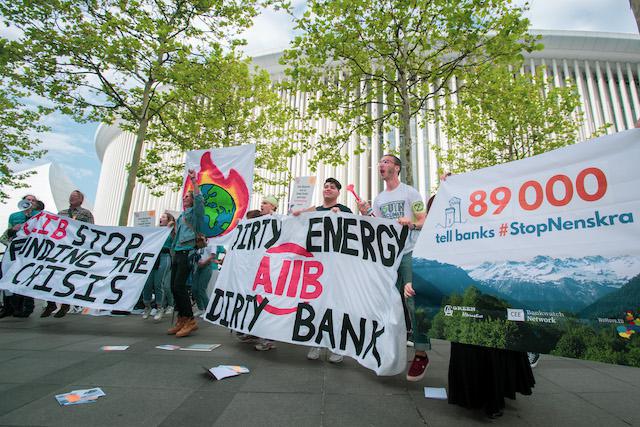 With this submission, the Coalition calls on AIIB to incorporate in its new safeguards the policy recommendations from the report “Uncalculated Risks: Threats and Attacks against Human Rights Defenders and the Role of Development Financiers”, that will help avert, mitigate and prevent threats and reprisals against human rights defenders.

The Coalition for Human Right in Development members and partners submitted a position paper to the Asian Infrastructure and Investment Bank (AIIB) Environmental and Social Framework (ESF) Review team in line with the on-going review.  The AIIB requested submissions from civil society organi

From February 28, 2018 to March 4, 2018 in Costa Rica, countries and civil society groups are negotiating the Regional Agreement on Access to Information, Public Participation and Access to Justice in Environmental Matters in Latin America and the Caribbean, also known as LAC P10. If adopted a

On December 22nd, the Coalition together with 30 organizations sent to the World Bank a joint submission with recommendations on the Bank’s Draft Guidance Notes for borrowing countries regarding how to implement the Bank’s new Environmental and Social Framework. The submission address

According to Caio Borges, Prof. Karin Costa Vazquez and Supriya Roychoudhury, if question marks on the future of BRICS are repeatedly raised, the New Development Bank (NDB) is probably the most concrete avenue through which the grouping can deepen co-operation. The NDB’s stated commitment to su

Read the full report: English | Spanish | French Partnering with Communities to Defend Human Rights In 2016 the Coalition engaged in partnerships with communities around the world to connect community struggles with strategic resources and campaign support and to bring community expertis

On Thursday, the World Bank approved a new Environmental and Social Framework to replace its existing safeguard policies. Members of the Coalition for Human Rights in Development criticized the missed opportunity to adopt robust protections for the human rights of communities impacted by Bank

In an opinion piece in Foreign Policy magazine, Maina Kiai, UN Special Rapporteur on the rights to freedom of peaceful assembly and of association, explains how the goal of sustainable development is under threat from growing restrictions on public participation in development and closing civ

On June 16th, the Palestinian human rights organization, Al-Haq, urged the World Bank to explicitly address the need for human rights safeguards for investments in conflict-affected areas during the Bank’s ongoing safeguard policy reform process. The Bank has announced plans to increase inve

Coalition member ESCR-Net is calling on leaders of OAS member states to address the financial crisis currently hindering the Inter-American Commission on Human Rights’ ability to operate as a key regional human rights mechanism. The crisis has already caused the IACHR to suspend its 159th and 16

NDB project funding has been the subject of intrigue and concern among civil society organizations (CSOs) since the bank’s formal launch in Fortaleza, Brazil, in 2014. Yet news of these first ‘green’ loans has done little to ease their fears. The problem, CSOs say, is that since the NDB still lacks a

As government ministers from Brazil, Russia, India, China and South Africa gather in Washington, DC for the third board of governors meeting of the BRICS New Development Bank (NDB) April 13 and 14, civil society groups in BRICS countries appealed to their governments and NDB management to operate

The Coalition for Human Rights in Development submitted recommendations today urging the World Bank to amend its proposed Environmental and Social Framework to meaningfully address human rights. The submission addresses arguments that have been put forward against embracing human rights an

The final consultation period for the World Bank’s revision of its social and environmental safeguard policies will end on March 15th, 2016. Comments on the proposed draft safeguards framework can be submitted until that date to safeguardconsult@worldbank.org. You can find more inform

Amnesty International argues that the recently launched Asian Infrastructure Investment Bank (AIIB), led by China, should draw on the experience of other development banks and implement strong human rights standards. The group raises concerns that the Bank’s development of an Envir

Over 180 civil society organizations from Latin America and the Caribbean call on their governments to prevent a weakening of human rights and development standards at the World Bank. The World Bank is presently holding consultations with its member State governments on a proposed revision of it

Groups Call on BRICS Bank to Engage with Civil Society

November 30, 2015: On the heels of the meeting of governors of the BRICS New Development Bank (NDB), civil society organizations from BRICS countries and countries that will likely be impacted by NDB projects called on the Bank to open a transparent and participative process for the development of

Bank Information Center releases new informational video on the World Bank safeguards review. It is under 5 minutes long and meant to foster a general understanding of the review and its significance, and motivate people to send a note to their World Bank Director asking for the strongest possible

Civil society groups around the globe call on the World Bank to hold robust in-country consultations on its proposed new safeguard policies. Read the letter here.

Letter from NGO Forum on ADB on AIIB Safeguard Standards

NGO Forum Calls on AIIB to Have Robust Safeguard Standards

For Immediate Release May 1, 2015  With 57 nations already on board the Asian Infrastructure Investment Bank (AIIB) as prospective founders, a 250-member strong civil society network made an appeal to the newly-formed bank to adopt robust safeguards in its principles, policies and operations.

March 30, 2015-  The Bank on Human Rights Coalition issued the following submission to the staff and Directors of the World Bank as part of the Bank’s ongoing safeguards review: Key Human Rights Concerns and Recommendations regarding the World Bank’s Proposed Social and Environmen

Statement on Obstacles to Participation in World Bank Safeguards Consultations

This letter, signed by 50 organizations, was sent today to World Bank President Jim Kim and Executive Directors detailing lack of notice and restrictive access to participation in ongoing safeguards consultations. Thanks to all who contributed to the letter and signed on. Please help distribut

The Annual Meetings: A Week in Review

From October 10–12, 2014 the World Bank and International Monetary Fund held their joint Annual Meetings in Washington, D.C. Scores of activists, community leaders and civil society organisations from across the world participated in meetings, panels and actions to affirm the importance of st

From the Guardian, published on Monday 29 September 2014 09.36 EDT. World Bank accuses itself of failing to protect Kenya forest dwellers Leaked document says World Bank violated its own safeguards in dealings with Sengwer people evicted from their lands A leaked copy of a World Bank investigatio

The following is an excerpt from an article published in the Hindu on July 30th, 2014. World Bank rolling back safeguards: Leaked report By Narayan Lakshman The World Bank may be on the verge of rolling back a wide range of in-built environmental and community protections surrounding its developm