On January 16, two Sengwer herders were shot by Kenya Forest Service guards implementing an EU-funded development project – the Water Towers Protection and Climate Change Mitigation and Adaptation (WaTER) Project. What UN experts have called “repeated attacks and forced evictions by agents of the Kenya Forest Service” is part of a longstanding campaign to forcibly evict the Sengwer from their forest homes, rather than supporting community land management programs which would protect the forest and the rights of indigenous forest communities. Sengwer women have especially suffered as they are violently evicted from their forest homes and separated from the traditional foods, medicines, and cultural resources they rely on to provide for their families.

Between 2007 and 2013, after receiving funds from the World Bank to implement a natural resources management project, Kenya Forest Service guards carried out a series of attacks on the Sengwer, arresting community members, burning their homes and destroying their property. The World Bank’s independent accountability mechanism found that the Bank should have anticipated the risk of violent evictions given KFS’ practices. Despite this history, in June of 2016, the European Union approved funding to KFS to implement the Water Towers Protection and Climate Change Mitigation and Adaptation (WaTER) project within Sengwer territory in the Cherangany Hills and Ogiek territory at Mt Elgon.

On Christmas day, 2017, 100+ armed Forest Service guards entered the lands of the Sengwer, and in the days following they fired gunshots, burned at least 15 homes, and killed the communities’ livestock. Then again on New Year’s Eve, KFS guards went house to house searching for community leaders, using live bullets to intimidate community members, and setting fire to more homes.

Despite repeated warnings of the escalating human rights risks, and calls for action, the EU has failed to ensure that the Sengwer and Ogiek people’s rights are protected. The EU announced January 17 a suspension of support for the project. This move is welcome, however, it is only the first step, as Sengwer homes continue to be burned. 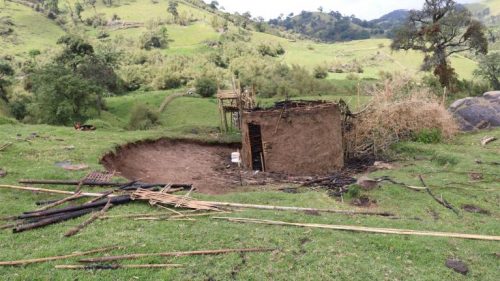 The Sengwer and Ogiek are calling for an urgent expert meeting to establish a clear roadmap to change Kenyan government agencies’ violent approach to forest management to a rights-based approach that works together with the Ogiek and Sengwer to protect the forest. If the safety and human rights of the Ogiek and Sengwer peoples cannot be immediately guaranteed, the EU must stop its support for the WaTER project.

Please share this ACTION ALERT to urge the EU to take immediate action to guarantee the safety and human rights of Kenya’s Sengwer and Ogiek people and a rights-based approach to conservation.

You can find more information and videos here: http://www.forestpeoples.org.

Myanmar’s nationwide civil disobedience movement (CDM), based on “no recognition, no participation,” is key to stopping the military from consolidating power after its 1 February 2021 coup d’état. Multilateral finance institutions (MFIs) must support the CDM, stating they will not deal with

The lush forests of the Sierra Madre mountain range, on the Philippine island of Luzon, have been home to the Dumagat-Remontados indigenous peoples for centuries. But their ancestral lands are now under threat. In this area, the Philippine government is planning to build the Kaliwa Dam, despite

January 9, 2019. The President of the World Bank Group, Jim Yong Kim, announced he is stepping down from his position this February 1, 2019 to take a position with Global Infrastructure Partners, a private investment firm that did extensive business with the Bank during Kim’s tenure. In a b

Join the Defenders in Development Campaign!

Around the world, as megaprojects and investments are imposed on communities without their consent or consultation, those working to protect their lands and resources, fight corruption, and defend human rights are under increasing attack.   For this reason, the Coalition for Human Rights in

This week as we celebrate Indigenous Peoples Day, communities affected by the Pojom II and San Andrés dams in the microregion of Ixquisis, Guatemala, filed a complaint with the independent accountability mechanism of the Inter-American Development Bank urging IDB Invest, the bank’s p

Asian Peoples Call For an End to ADB Immunity

A number of civil society organizations in Asia, including People’s Forum Against ADB and coalition member NGO Forum on ADB have launched a call challenging the immunity of the Asian Development Bank. The organizations, along with community representatives, youth associations, and stu

Communities affected by the Tanahu Hydropower Project, which includes damming the Seti river in Nepal, recently submitted a 26-point memorandum to Nepal’s Energy Minister, stressing concerns regarding the project’s impacts on their traditional lands and livelihoods and failure to co

Another anti-dam activist has been murdered in Latin America. On Tuesday, January 17, protestors led a peaceful demonstration against a hydroelectric plant in Guatemala. But the event ended in death after paramilitaries shot and killed 72-year-old activist Sebastian Alonso. The march had ori

Coalition member Forest Peoples Programme has released a report on the impacts of deforestation and forest degradation on indigenous and local communities in the DRC, highlighting the human rights violations and socio-environmental impacts often caused by these activities. The report also c

Indigenous Peoples in Crosshairs of Development

Peter Bosshard, interim ED of Coalition member International Rivers, explains how indigenous communities are particularly at risk of landgrabbing and face increasing repression, even death when standing up for their rights. Read the article here.

4/15 Tell the World Bank to Safeguard People & the Planet!

While the World Bank’s motto is to “End Poverty” and promote sustainable development, too often Bank investments disregard the human rights and priorities of poor communities, leaving them worse off. As the World Bank prepares to host finance ministers from across the globe

In a victory for indigenous and human rights activists, the Central American Bank for Economic Integration (BCIE) announced Friday the suspension of its financing of the Agua Zarca Dam. The Honduras dam project has been a focal point for international attention following the killing of h

In the face of rapidly shrinking civil society space and growing attacks on human rights and environmental defenders, sign this statement (English, French, Spanish, Arabic) on the Responsibility of International Financial Institutions to Ensure Meaningful and Effective Participation and

Follow this action alert to tell FMO, Finnfund, CABEI, Voith and Siemens to immediately pull out of the Agua Zarca Dam and to not get involved in any other projects on the land of the indigenous Lenca people. intlrv.rs/StopAguaZarca.

The Coalition for Human Rights in Development expresses our deep sadness and outrage at the assassination this week of indigenous leader and environmental activist Berta Cáceres. Berta was the coordinator and co-founder of the Council of Indigenous Peoples of Honduras, COPINH. She fought to d

Dr. Jim Yong Kim, President, World Bank January 30, 2015 Dear Mr. President, We are the Requesters, Anuak refugees and asylum seekers based in Kenya (Dadaab, Kakuma and Nairobi) and South Sudan (Gorom), who submitted a complaint to the World Bank Inspection Panel in September 2012. We have written

In honor of the anniversary of the adoption of the Universal Declaration of Human Rights, the Center for International Environmental Law is sending a message to World Bank President Kim, urging the Bank to respect and protect human rights in its lending. Will you join us?  Please take a minute to sig

Report on Forced Evictions in Lagos

Amnesty International released a report today on forced evictions in the Badia East community of Lagos, Nigeria. In February 2013, the Lagos state government, with the support of heavily armed police, demolished at least 266 structures that served as homes and businesses. The demolitions w