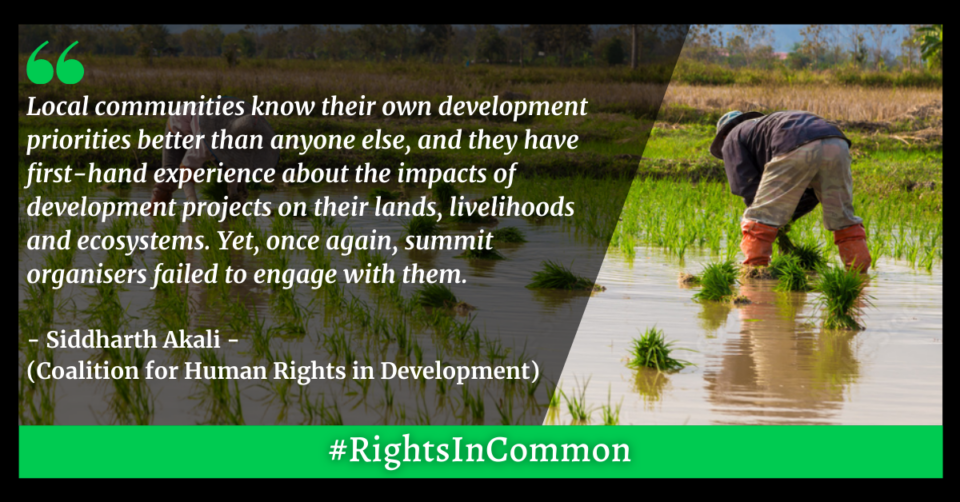 October 16, 2021 – If you had two trillion dollars, how would you spend it? Will you use it to make the world a better place? How will you know you’re making a positive impact for those who are most vulnerable?

Who will you ask for advice? For the 500 public development banks (PDBs) meeting at the second global Finance in Common summit on October 19-20, these questions are more than just hypotheticals.

As their name suggests, PDBs are publicly funded, and they have a development mandate. Together, they have over US $ 11 trillion in assets and average annual investments of about US $ 2,300 billion.

Finance in Common is designed to be the only global summit when all the PDBs come together to meet each other and their key stakeholders including governments, central banks, private sector, think tanks and academia.

The goal of the summit is to discuss common actions for climate change and sustainable development with a focus on food systems, including agriculture and agribusiness. However, there are no spaces to confront or learn from PDBs’ destructive legacy of exacerbating anthropogenic climate change, increasing food insecurity for women, and causing human rights violations.

For this reason, several civil society groups decided to boycott the event, as they did last year, since engaging with the summit could legitimize a platform which reaffirms PDBs’ top-down approach to development.

In 2020, thanks to global campaign and advocacy efforts—led by hundreds of civil society groups from around the world and several United Nations special procedures—the final declaration of the summit contained a reference to community-led development, human rights and Indigenous Peoples’ rights.

This year PDBs recognized that there have been limited or no collective initiatives on these commitments, admitting that they were poorly addressed, and would require greater effort for the banks to move forward collectively.

The second summit presented a perfect opportunity to start remedying this gap by inviting rights holders — such as local communities, Indigenous Peoples, farmers, fisherfolk and social movement groups — to share their expertise.

Local communities know their own development priorities better than anyone else, and they have first-hand experience about the impacts of PDB funded projects on their lands, livelihoods and ecosystems. Yet, once again, summit organisers failed to engage with them.

Several CSOs had been asking summit organisers to include grassroots groups and Indigenous Peoples in all the main panels, and to have civil society-led spaces within the summit. This could have helped PDBs learn from communities who are directly impacted by their projects. But summit organisers did not rise to the opportunity.

There are several communities around the world who could help PDBs transform development finance, so that it is bottom up and based on local needs. The Paten Clan, a community in Pakwach District in northern Uganda, is one such example.

The community is affected by the Wadelai Irrigation Project, which is part of the Farm Income Enhancement and Forestry Conservation Project, supported by the African Development Bank and the Nordic Development Fund. In August 2021, sixteen community members were shot at and wounded when they protested the project taking their land without their permission.

The experience of the Paten Clan offers a clear example of what happens when PDBs don’t listen to local communities, even if their projects have an underlying positive purpose.

Additionally, this case shows how conducting meaningful human rights due diligence could have improved project outcomes, and potentially avoided harms, as there was previous documentation of instances of violence taking place in other similar projects in Uganda.

Several PDBs also have explicit policies expressing zero tolerance for reprisals in their projects. Hearing from representatives of the Paten Clan could have provided an opportunity for PDBs to learn directly from human rights defenders affected by their project on how to prevent reprisals and what to do when reprisals do occur.

Failing to bring in community voices was a missed opportunity to begin to unlock the full potential of what development could be if it was designed and led by the people who had to live with its impacts. PDBs have incredible resources which can be used to support a resilient future built on equality and justice. But they have to become serious about their commitments towards human rights and community-led development.

The first step to advancing community-led development is to listen to communities who are affected by their projects, especially those who report human rights violations. PDBs need to get out of their echo chambers, and sit down with local communities, Indigenous Peoples and social movements, and ask them how they want to spend two trillion dollars a year to advance their own development pathways and priorities.

Only then do we have any hope of addressing climate change, achieving food security, and advancing sustainable development.

This op-ed was originally published by IDN-InDepthNews, on 16 October 2021.

On October 19-20, the leaders of the world's public development banks will gather for the "Finance in Common" Summit.

In 2017, the people of Zagora, Morocco, took to the streets in what became known as the ‘thirst revolution’. They were demanding safe drinking water and an end to the excessive use of water by big agricultural companies. In an already arid area, experiencing frequent droughts and heatwaves due to cl

Why Development Finance matters for Business and Human Rights

As the UN Forum on Business and Human Rights opens today in Geneva, the Coalition for Human Rights in Development and the International Corporate Accountability Roundtable today released a new factsheet: 10 reasons why development finance matters for business and human rights. For groups worki