The government has responded with particular vehemence to attempts by activists to monitor labor and human rights issues related to cotton work. In 2015 this harassment reached unprecedented levels as the government used arbitrary detention, threats, degrading ill-treatment, and other repressive means to silence monitors and undermine their ability to conduct research and provide information to the ILO and other international institutions.

This interference undermines the government’s stated commitments to take steps to reform its cotton sector and calls into serious question the government’s role as a good faith partner in reform. Interference with the work of independent monitors should raise deep concerns on the part of the World Bank, ILO, and other international partners. Independent monitors who met with the World Bank and the ILO told us that these institutions did not appear to prioritize the safety of independent monitors, rarely making inquiries and not making public statements or offering other support when monitors were arrested, ill-treated, or experienced other trouble.

In 2015 the government imposed spurious criminal sanctions on one Uzbek-German Forum monitor that prevent him from future human rights monitoring work and forced another to flee the country. The government’s persecution of independent monitors is deeply troubling both for the individual harms suffered and also because it threatens the ability to carry out independent monitoring of cotton harvest labor practices at all. 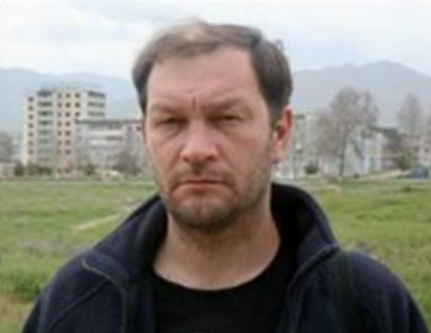 Dmitry Tikhonov, a journalist, civic activist, and human rights defender, has worked for four years with the Uzbek-German Forum to document labor and other human rights issues connected to cotton production in Uzbekistan. Tikhonov, who was based in Angren, and had a home office in nearby Yangiabad, conducted this work openly and, over the last several years has regularly provided information to the ILO, World Bank, and international organizations working in Uzbekistan. In August 2015, Tikhonov learned that the police had begun questioning his friends and acquaintances to gather information about him and his work.[1]

On September 19, a group of about 10 people, including several mahalla chairpersons, approached Tikhonov when he was observing laborers departing for the cotton fields from a central square in Angren, and began demanding his documents and shouting accusations, including that Tikhonov was gathering information intended to taint Uzbekistan’s reputation. After the incident, three mahalla chairpersons complained to the police that Tikhonov was interfering with the campaign to mobilize workers to pick cotton and that he insulted and swore at them. The next day, while Tikhonov was again observing departing workers, a man approached him and told him that he did not want to pick cotton and was forced to hire someone to pick in his name. The police took Tikhonov and the man to the police station where they were held in separate rooms. Police questioned Tikhonov and told him to write a statement explaining why he is “against cotton.” A senior officer entered and swore at him, threatened physical violence, and began hitting Tikhonov repeatedly on his face and head with a thick stack of paper, yelling, “cotton is the achievement of our fatherland! Cotton is our nation’s wealth!”

On September 30, Tikhonov arranged for an ILO monitoring team to meet with people from Angren who were forcibly mobilized to pick cotton. On the way to the meeting he noticed he was followed by plainclothes men in three cars. He later learned that police visited the workplaces of all the people who spoke to ILO monitors and interrogated them.

Tikhonov learned that police charged him with hooliganism, a misdemeanor that carries a penalty of up to 15 days’ administrative detention, stemming from the complaint made by the three mahalla chairpersons.[2]

Tikhonov remained away from home for several weeks until October 27, when he learned that there had been a major fire at his home in Yangiabad October 20. The police knew about the fire when it occurred, but failed to inform Tikhonov’s lawyer, who maintained regular contact with them. Tikhonov found that only the room he had used as his home office had burned but the entire room and its contents were completely destroyed—even the roof had collapsed. He lost everything he used for his work, including two computers, a laptop, a printer/scanner, video and sound equipment, all his contacts, papers and files as well as his legal library. Tikhonov’s cash savings in the amount of $1500 was also burned and most of his clothing was destroyed. Tikhonov also noted that a box containing about 100 legal guides on child and forced labor that he had created for distribution had disappeared even though it was kept in another room that did not burn. In addition, Tikhonov said that his two hard drives went missing after the fire. One contained his archive and database, and the other had his current work. The hard drives were stored in a metal box that Tikhonov dug out of the burned debris. The box was there but the hard drives were missing and no parts of them were visible.

Around the same time, police brought two more administrative cases of hooliganism against Tikonov, one stemming from video recordings the officials could only have accessed from his equipment or email, since he had the only copy and the video was never made public, alleging that he made the recordings without permission. The other charges allege that on October 27, the day Tikhonov went to assess the damage at his home, he caused a scandal with some people in Angren, 13 kilometers away. Tikhonov does not know the other people allegedly involved. Committing a third administrative offense in the course of a year can result in criminal, rather than misdemeanor charges, and Tikhonov feared that he could go to prison. Eventually he was convicted and fined on the third set of charges. In addition, a series of articles appeared on pre-government websites discrediting Tikhonov, accusing him of corruption and of being an American agent. Some of the articles “analyzed” Tikhonov’s unpublished research findings that could only have been taken from his computer and email. Fearing possible spurious criminal prosecution and other forms of persecution, Tikhonov was forced to flee Uzbekistan and is now residing outside the country, unable to continue his monitoring.

Arrest and Sentencing of Uktam Pardaev

Uktam Pardaev, a human rights defender from the Jizzakh region, for years has advocated on behalf of victims of corruption and monitored the use of child and force

d labor in the cotton sector. On November 16, 2015 police arrested Pardaev on spurious charges of taking a bribe, insult, and fraud on the basis of a complaint allegedly made by someone who had previously sought Pardaev’s assistance with whom Pardaev had never exchanged any money. In the weeks prior to his arrest, Pardaev noticed increased surveillance of his activities. The National Security Service, known widely by its Russian acronym, the SNB, summoned several of Pardaev’s acquaintances and people he had assisted and interrogated them, beating some of them. He told staff at several international embassies that he feared arrest.

Pardaev was held for 57 days in a pretrial detention center in the Dustlik district of Jizzakh and on December 26 was transferred to pretrial detention in Khavast, in the Syrdaryo region. Guards there beat him severely in one occasion, apparently for failing to get undressed quickly. Pardaev went to trial on January 11, 2016. After a single hearing, a judge of the Dustlik district court convicted Pardaev of all charges and sentenced him to 5 and a half years in prison. The judge suspended the sentence, imposing three years’ probation, and Pardaev risks prison if found to violate any conditions of his probation, which include a 10 p.m. curfew, registering twice monthly at the police station, and not traveling outside the Jizzakh region. Police have also told him that he is forbidden from all human rights work, although this prohibition is not included in the sentencing documents. 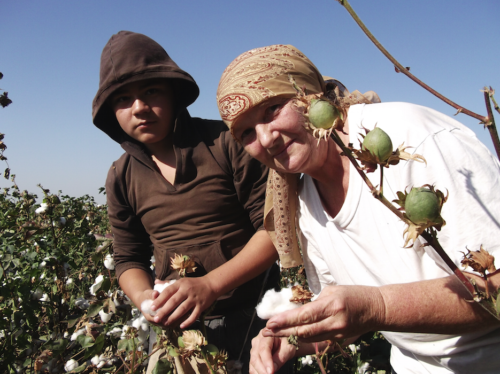 A long-time human rights and civic activist, Elena Urlaeva, head of the Tashkent-based Human Rights Alliance of Uzbekistan, has monitored labor rights and the cotton harvest for many years and met regularly with the ILO during the 2015 season.[3] She was arrested on at least four occasions during the 2015 cotton harvest as well as twice during the spring planting and weeding season. On one occasion, on September 19, police in Kuychirchik, in the Tashkent region, arrested Urlaeva, her husband, their 11-year-old son, a family friend and a farmer who had invited them to stay on his land. Police arrested them ostensibly because Urlaeva “photographed the fields without permission,” when she was walking with the farmer. Urlaeva and her family were released late that evening after lengthy interrogations, but police held the farmer in custody overnight.

Police also arrested Urlaeva twice in May when she distributed information about the prohibition against forced labor when local officials were sending people to weed the cotton fields. Police in Chinaz arrested Urlaeva on May 31, 2015, as she observed the forced mobilization of medical workers to the fields. They held her for 11 hours and subjected her to severe ill-treatment, including forcibly injecting her with sedatives, subjecting her to a forced x-ray, and carrying out a body cavity search to look for a flash drive. Police refused her access to a toilet, making her relieve herself outside in front of police officers, who filmed her and humiliated her. They later posted a video of the incident on the internet. Urlaeva also observed near constant surveillance from August through November, including plainclothes men posted outside her home, following her, and taking video recordings and photographs of her. She described this as psychologically exhausting as well as a serious impediment to her work.

On March 9, 2016, Urlaeva checked into the Tashkent City Psychiatric Clinic after experiencing multiple traumatic events, including ill-treatment by the police during her efforts to monitor the cotton harvest.  In late April, Urlaeva’s doctor informed her and her son that she was in good health and would be released on May 2. However, the hospital then refused to release Urlaeva without citing any medical reason, citing “official orders,” in effect using the hospital as a means of punitive, arbitrary detention. The hospital finally released Urlaeva on June 1, after significant international pressure.

After her release, Urlaeva reported that she suffered ill treatment during her detention. “Hospital staff turned aggressive patients on me, who beat me and dragged me by the hair. They did this first to break my will, knowing I am a human rights defender,” she said. “One time, I tried to defend myself from these patients with an iron chair The staff then started filming me on their mobile phones and said the video would be evidence that I was aggressive and ill.””

Malohat Eshankulova is a Tashkent-based independent journalist and activist who has monitored and written about labor rights in the cotton industry for several years, including with the Uzbek-German Forum.[4] On September 27, police in the Saikhunbad district of the Khorezm region arrested Eshankulova along with Elena Urlaeva and held them at the police station for several hours.

On September 29, Eshankulova, Urlaeva, and two local activists who together were observing college students being sent to the harvest in the Khazarasp district of Khorezm. Police arbitrarily detained them for 14 hours, during which they were interrogated constantly about their activities and accused by the police of “treason to the motherland.” Police also subjected Eshankulova and Urlaeva to a strip search and body cavity search. Police released them without charge after threatening to kill them if they ever returned to Khorezm.

Security services officers in the Ellikkalа and Beruni districts of Karakalpakstan, sites of World Bank-funded projects, prevented Eshankulova and Urlaeva from meeting with teachers and medical workers forcibly sent to the cotton fields in October.

via the  Uzbek-German Forum For Human Rights

[1] The information in this section comes from letters, emails, and telephone interviews with Dmitry Tikhonov from September 2015-February 2016.

[2] Minor hooliganism is art. 183 of the administrative code.

[3] Information in this section comes from telephone conversations and email correspondence between Elena Urlaeva and the Uzbek-German Forum for Human Rights.

[4] Information in this section comes from telephone conversations and email correspondence between Malohat Eshankulova and the Uzbek-German Forum for Human Rights.