Reprisals against Members of the Boeung Kak Community, Cambodia 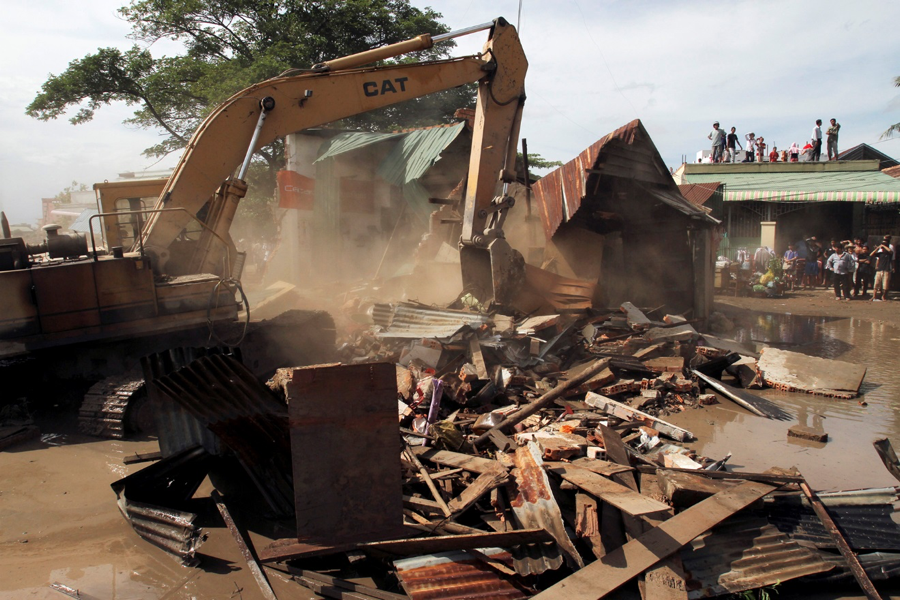 In 2007, the Municipality of Phnom Penh leased 133 hectares of land in the Boeung Kak Lake areas to Shukaku Inc., a private company owned by ruling Cambodian People’s Party senator Lao Meng Khin, for a period of 99 years. The company planned to develop the land into a high-end residential, commercial, and tourism complex. From that point onwards, the company and the Cambodian government began pressuring residents of the area to relocate, offering deeply inadequate compensation in exchange.

On August 26, 2008, the company started pumping sand into the lake, causing residents’ homes to flood and the destruction of some houses. By this time, the government and company had persuaded or coerced more than 3,000 of the 4,000 affected families from the land, despite many of the affected families having strong legal claims to the land under the Land Law. The municipality then issued a final eviction notice in April 2009. The government along with the company began forcibly evicting the remaining residents.

As discussed below, over the course of the last seven years, Cambodian security forces have threatened and harassed current and former residents of Boeung Kak Lake areas in Phnom Penh for campaigning against their forced evictions. Cambodia’s security forces have aggressively denied the right to peaceful assembly by violently breaking up peaceful protests. The authorities have filed trumped-up charges against protesters or would-be protesters. Those charged have been routinely denied bail, convicted after expedited and truncated trials that did not meet international standards and did not give the accused adequate time to prepare and put forward a defense, and given significant prison sentences.

The World Bank Inspection Panel later investigated and found that there was a direct link between the Bank-financed $23.4 million Land Management and Administration Project (LMAP) in Cambodia, which was approved in February 2002, and the forced evictions suffered by residents in the Boeung Kak Lake area.

Criminalization of Protests and Trumped-Up Charges against Community Members

Since 2009, Cambodian security forces have carried out a string of arrests of Boeung Kak Lake activists. Initially, police typically released the activists after one or two nights in detention. But since the May 2012 arrests of 15 Boeung Kak Lake residents and former residents, police have charged many detainees from the community with criminal offenses. In several cases, courts have convicted them in trials that do not meet Cambodia’s Code of Criminal Procedure or international fair trial standards.

As the hours passed, most of the gathered residents moved into the shade. A small core group remained on the sand lot where the lake used to be, singing songs. At about 11:30 a.m., a mixed force of regular police and district public order para-police surrounded the group and, as the demonstrators dispersed, chased down and arrested 13 women. One protestor described how she was arrested when trying to help a friend, whom security personnel had captured. She said:

They were chasing people like they were trying to catch dogs. Some stepped on my friend’s children.… They pushed me in the car and drove away very fast. I couldn’t get up. I wanted to jump even if I died but then I thought of my grandchildren.

Nget Khun, who was 72-years-old at the time, told Human Rights Watch, “Four or five [security personnel] carried me like they were carrying a pig and then threw me in a car.”