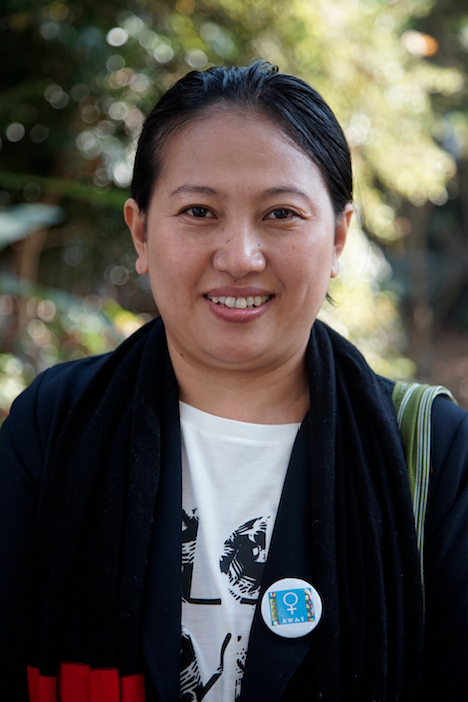 This week, as we celebrate Women Human Rights Defenders Day, November 29th, we honor the courageous work of women defenders around the world fighting for their human rights and their communities. Women defenders are on the front lines of the struggle for sustainable, equitable development. They run agricultural cooperatives and deliver health and education services. They raise their voices, organize, and mobilize to shape development proposals and to fight against ill-conceived investments that threaten the well-being of their communities.

For this work, they face discrimination, threats, intimidation, sexual violence, detention, and even death.

Moon Nay Li is the General Secretary of the Kachin Women’s Association Thailand (KWAT), which runs empowerment and sustainable development initiatives with Kachin women in Thailand and Burma/Myanmar. KWAT operates critical programs ranging from health clinics and vocational training to anti-trafficking and political empowerment programs. Moon describes the challenging environment she faces while doing this work. “My networks and I receive threats and pressure from authorities including the police, military and local government officials who try to crack down on our movement.”

According to Moon, this repressive environment poses serious challenges for civic engagement and public participation. “There are many restrictions. If we want to do a big event, we have to file a report with the police officials in the city. They tell us ‘You can walk on the street but be silent, don’t shout.’”

Earlier this year, Moon and her colleagues organized a march to celebrate International Women’s Day. “Although we were told to be silent, we shouted because it is our right to do so. Then police officers came to talk to our leaders. They asked many questions and gave a warning to our leaders,” explained Moon. “It is very difficult to mobilize people when the authorities threaten the very people who do the mobilizing.”

The World Bank and other development banks are ramping up investments, especially private sector investments, in Burma/Myanmar and other “fragile and conflict affected states”. While the banks acknowledge that sustainable development requires human rights principles like transparency, access to information, public consultation, and accountability, they haven’t seriously grappled with how to ensure these principles are followed in environments where public participation and fundamental freedoms of expression and assembly are severely restricted.

According to research by Global Witness, some of the fiercest attacks on women and other human rights defenders occur in the context of development investments. Governments often clampdown on human rights in an effort to curtail potential opposition to development projects. As a Human Rights Watch investigation revealed, when communities speak up, they are labeled “anti-development” and subjected to threats, harassment, and violence at the hands of authorities or public and private security forces.

Moon’s story demonstrates why it is critical for development finance institutions like the World Bank and the Asian Development Bank to ensure that there is an enabling environment for human rights and public participation around their investments. In their social and environmental impact assessments, development banks should be assessing differentiated impacts on women and girls and identifying risks to women defenders, which may be different than the risks faced by men. They should ensure that their investments aren’t causing, contributing to, or exacerbating human rights abuses. And where threats arise, they should have protocols in place to protect defenders and to minimize and remedy any harm.

You can learn about the campaign to get development financiers to safeguard human rights defenders and read the rest of Moon’s story at www.rightsindevelopment.org/hrd.