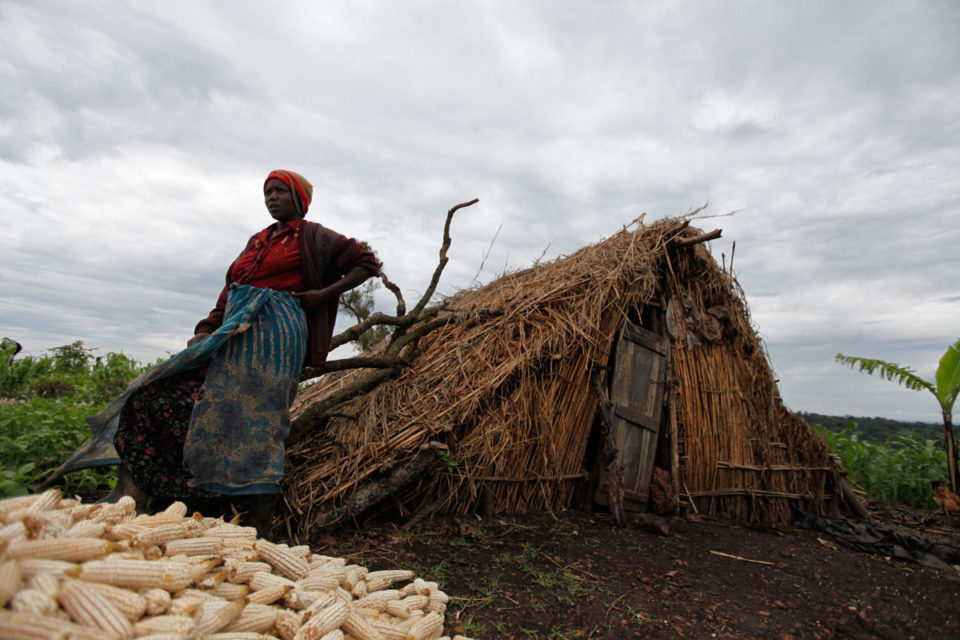 A woman stands outside the temporary shelter she built after security forces forcefully evicted her and thousands of other residents of Mubende and Kiboga districts in Uganda for the development of pine and eucalyptus plantations. © 2011, Echwalu Photography

The Ugandan government has increasingly intimidated activists working on sensitive subjects and has obstructed civil society reporting and advocacy in recent years. Amongst those targeted by the government have been community members and independent groups who have been critical of proposed development initiatives, including initiatives funded by the International Finance Corporation, the World Bank’s private sector arm.

According to NGO and media reports, between 2006 and 2010 security forces forcibly and brutally removed several thousand people from Mubende and Kiboga districts in Uganda to make way for the IFC-financed New Forests Company to operate pine and eucalyptus plantations over several years. In doing so, the government ignored interim High Court orders barring the evictions pending a full hearing, among other violations of the rights of the community. The government labeled the residents “illegal encroachers.” In September 2011, Oxfam published a report on land conflicts in various countries around the world, which included a case study researched and written by Uganda Land Alliance (ULA) together with Oxfam documenting the forced evictions. New Forests Company has strongly denied any involvement in evictions or violence and challenged the NGO findings. In December 2011, several community representatives, ULA, and Oxfam filed a complaint on behalf of the affected communities with the IFC’s independent accountability mechanism, the Compliance Advisor Ombudsman (CAO). This led to a mediation process resulting in settlements between the communities and New Forests Company in July 2013 and May 2014.

Senior government officials criticized the report findings and sought retraction, then public “clarification,” apologies, and amendments to Oxfam’s report. In April 2012, the Ugandan Ministry of Internal Affairs launched what it called an “investigation into the alleged improper conduct” of Oxfam and ULA. The minister alleged that the activities of the NGOs had “incited local communities into violent and hateful acts against the New Forests Company” and that this caused “economic loss to some investors … [and] tainted the Country’s international image on investor management, the respect and promotion of human rights and even brought the person of the President in to disrepute.”

The Ministry of Internal Affairs tasked the government’s NGO Board to conduct a wide-ranging investigation which went well beyond the legal mandate and technical capacity of the board. Ultimately, the NGO Board investigation recommended that the NGOs have their permits withdrawn if they did not take “corrective action,” that the Oxfam report be “withdrawn,” and that a retraction be issued. Furthermore, the board said that the NGOs should “make apologies” to the Ugandan government and to the president.

In response, ULA publicly stood by the report and its conclusions, and pressed the government to address the problems documented in the report. They also expressed alarm that the government’s heavy-handed reaction to their investigation would create a chilling environment for others. “The price for Uganda Land Alliance’s investigations into cases of land grabbing has been set so high,” the group said, “that once paid, it will become extremely risky for anyone attempting to question the vices of land grabbing and forceful evictions of innocent citizens.”

In a May 2012 letter to ULA, the minister of internal affairs called the group “contemptuous,” and accused it of seeking to “ridicule” the government’s authority and institutions. The minister reportedly told ULA and Oxfam that they would lose their licenses to operate, and therefore have to close down if they did not retract their report findings and apologize. In his opening remarks at the National Civil Society Fair, the minister further accused ULA of “peddling lies” and said that he would “bring them to order so that they don’t spoil the image of the country, the head of state, and the first family, and any other institutions of government.” On June 14, 2012, ULA publicly expressed regret for inaccurate or speculative statements that the media might have made when writing on the content of the report and apologized for misunderstandings.

According to current and former employees at ULA, the organization and some staff members faced threats and surveillance after ULA published the report on the evictions in Mubende and Kiboga and later filed a complaint with the CAO. Unidentified men began telephoning both the executive director and the communications officer, telling them to “back off” this issue.

Anonymous callers threatened two activists on various occasions. Community members also reported to ULA that they had faced threats and harassment for articulating concerns about the project, and said they had been under surveillance.

A ULA employee at the time described being followed by unknown men whom she could not identify but assumed to be with the security forces. She also observed plainclothes security personnel monitoring community meetings in which ULA was participating. She said:

From the moment we filed a complaint with the CAO, government officials accused us of spoiling the image of the state… We received threats… My colleague claimed he received threats via his mobile telephone. One day, someone I know said to me, “If you don’t do these things, they will kidnap your children.” He had connections with the government and told me he was just telling me “as his friend, to drop the case.”

Geoffrey Wokulira Ssebaggala, a human rights defender and journalist who covered the forced evictions said that he also received numerous threatening telephone calls, beginning around January 2010. Prior to this, in around October 2009, Ssebaggala had been arrested for photographing the police arresting community members who were resisting eviction. He was told he would be released provided he deleted the photograph. Ssebaggala recalls receiving a telephone call from a private number when he was working in Kampala one day, at around 9 a.m. The caller said he was from “security” and said, “If you don’t back off your involvement in the land issue, it will be a matter of life and death.” Ssebaggala received several more calls over the following two years, often from the same man, who once said, “You’ve refused, but we’ll get you, anytime.”

According to Ssebaggala, in mid-2010 his home was burgled and his laptop and telephones were stolen, while everything else was left untouched. He reported the threats and burglary to two separate police stations, but was told at each that they needed money to “facilitate” any investigation. He told Human Rights Watch that the World Bank should have done more to respond to these reprisals against him and other critics of the project:

Free speech is the cornerstone of transparency and accountability. Where World Bank projects are being implemented, citizens must have a voice.… The World Bank should have done more to protect the security of people speaking out against this project. It’s us who facilitate the voice of the people. I’m not aware of them [the World Bank] doing anything [about the reprisals against critics of this project].… This makes me believe they think free speech is not an issue for them.

ULA staff noted that the fallout from their research on the IFC-financed project has continued to plague them. One ULA staff member said:

There is still the stigma. We don’t go out as strong any more. We are very cautious about what we say. We don’t say anything controversial in a meeting any more. It affects how we do our things.

When ULA makes a statement critical of government action, some staff members feel that the government’s response continues to be that ULA is motivated by a desire to undermine government programs.

On May 17, 2014, the ULA office in Kampala was burgled and information-rich property, such as computers and cameras, were stolen, while other more valuable property was left untouched. It is unclear if this event was connected to the evictions reporting, but some observers felt it may have been. ULA reported the burglary to the police, but it remains unsolved.

The former World Bank country manager conceded to Human Rights Watch that they had not taken concrete steps to help create or protect any kind of a space within which community members, NGOs, and journalists could publicly raise concerns about this or other projects. Rather, the Bank viewed free speech issues and the broader crackdowns on civil society as being best handled by bilateral donors. The World Bank representative also said that while ULA had reported the attacks to the World Bank, they had not expressly asked that the Bank do anything about the attacks they were facing.

Published in Human Rights Watch report, At Your Own Risk, June 2015.

Human Rights Watch
Previous Post:
In Nepal, Fighting for the Rights of Indigenous Peoples
Next Post:
The persecution of Pastor Omot Agwa in Ethiopia
no comments