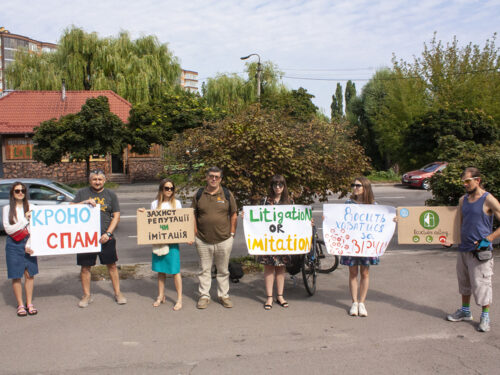 Ecoclub’s members together with other environmental activists supporting Ecoclub’s case near the court building (August, 2020)

In the village of Horodok, in Ukraine, a subsidiary company owned by the Austrian company Kronospan is building a wood processing factory. Local residents fear this factory could further pollute the area, where there is already a big chemical plant, as well as other factories.

Kronospan is one of the world’s largest manufacturer of wood-based cladding elements, it operates a total of 40 plants in Europe and it’s a long-standing client of the European Bank for Reconstruction and Development (EBRD).

As reported by Bankwatch, “Although the planned Horodok facility is not financed by the EBRD, over the past 17 years, the bank has awarded Kronospan more than a billion euros for at least 11 other projects. (…) The EBRD has agreed with Kronospan Ukraine to invest EUR 75 million in the company’s facility in the Volyn region, and EUR 41 million for the company’s balance sheet restructuring”.

Kronospan is a company with a very controversial track record: its projects have caused severe environmental pollution, there are cases of alleged corruption and illegal logging, and attempts to silence local civil society protesting against its factories through lawsuits.

As explained in a briefing published by the Ukrainian environmental NGO Ecoclub, “Kronospan has been criticized for its business practices and the pollution provoked by the emissions from many of its factories. In June 2018, the British NGO, Earthsight published a comprehensive report on illegal logging and widespread corruption in the Ukrainian forestry sector. It also highlighted the fact that several major European wood-processing companies imported illegally harvested timber from Ukraine, thus clearly making them complicit in this corruption”.

Activists from Ecoclub from Rivne were sued for defamation, after publishing a report raising concerns about the negative environmental impacts the facility might have. The charges were filed by Kronospan’s subsidiary, Technoprivod Invest Group.

We speak with two environmental activists from Ecoclub, Andriy Martynyuk and Valerie Trykisha, about their struggle and the challenges they are facing.

Sixteen years ago, Kronospan decided to open a factory in the Volyn region in the city of Novovolynsk, which is an industrial city with a lot of mines, where many Soviet mines were also located before, and near to a major port city. They got loans from EBRD and they decided to construct this plant. It is a huge plant, has been operating for 16 years, and expanded last year. Their main products are: plywoods, particle boards, fiber boards, floors, furniture etc. The problem for the city of Novovolynsk is that it is already an industrial city with high levels of air pollution and when they opened the plant, they just added to the already existing harm to the environment.
The locals (we met them this summer) are facing mainly housing problems. For instance a local woman has told us that she had cancer and she connects it to the operation of the plant. They experience health problems and severe diseases connected to respiratory tract and other severe conditions like infertility, cancer etc. Many young people are leaving the city.

There are pictures where you can see that the nearest houses are less than a hundred meters away from the plant. When they expanded the plant, they built a huge wall, and the nearest houses and gardens are next to this wall. From the one side the plant is connected to the city and from the other to the village, so the neighbouring villages are suffering as well. There are also huge areas of storage of wood, mainly fine wood because they are claiming they collect left-overs from the wood processing.

Kronospan has a very controversial track record. Can you tell us more about it?

As analyzed by the report by Earthsight, Kronospan was also one of the companies that illegally imported wood to Europe and it is one of the suppliers of IKEA. They process more wood than stated in their reports and are logging some illegally fine wood.

Can you tell us more about the planned new plant?

Now we are campaigning against a new plant in Horodok, that is going to be much bigger and will host around 80% of all wood lodged in Ukraine. The construction works have already started, and they plan to operate and start the production by the next year. It will be the biggest plant in Ukraine.

In 2019, they published a notice about the coming of a new investor to the Rivne region and some of the people were excited because they were offered millions of euros in investments, so this investment was long expected given the large economic crisis. Before any decision was taken, there was a bad sign when reports on negative environmental impacts were published and there were meetings against this plant because the nearest building is also very close to the side of the future plant and they are expecting even bigger levels of pollution. In the same region there is the biggest chemical plant in Ukraine and people are quite scared about the construction of this plant.

There is basically a big conflict of interest, since local authorities are welcoming them because of the huge investments in the region and the job offerings are seen as a nice chance to earn more than they would without it. Some of the people are against it (not all of them), but some care more about the economic state of affairs because we are in an ongoing crisis. The choice of the future location is great in terms of logistics – they chose it because there are some other industries nearby, so they will have access to infrastructure. So, the choice of the place was based on logistics rather than on a safety evaluation of the location near the city.

One of the most noticeable protests was organized by an initiative group – the locals organized this group to protest against the plant. The leader was a veteran who participated in the war in the East of Ukraine. He got a lawsuit from the representatives of the company and they wanted compensation of approximately 5.000 euros from him.

How is the company trying to silence the protests?

Last year the locals were concerned by the report of the environmental impacts assessment of the plant and they wanted Ecoclub to analyze it and evaluate whether it was right or wrong and what the potential risks could be. A researcher from a local university analyzed their report and found out that the concentration of pollutants exceeded the safe levels and especially formaldehyde, which can cause cancer, could exceed the safe levels and the same could happen with other pollutants as well. So, the biggest problem would be the air pollution by these harmful substances.
Ecoclub published these notices based on this report, and then when it was published in the webpage, Facebook etc., the representatives of the plant saw it and wanted Ecoclub to withdraw all these remarks and they filed a lawsuit this winter. They also demanded a compensation of approximately 5.000 euros because of the injury caused to their business reputation (claiming that these were false statements).

The process was postponed because of the coronavirus outbreak and the quarantine, on their initiative mostly. However, we tried to undertake different actions of protest like gaining public support through the media and highlighting the situation. The last court hearing took place this Monday and Ecoclub has unfortunately lost this case. We are going to appeal this decision once the full decision will be published. The media was also publishing that we were wrong, but the truth is known to the huge public. This trial had all features of a SLAPP, strategy litigation against public participation.

There was actually no argumentation for the decision; they just announced the results, but we are waiting for the full text of the Court’s decision. It was more about their speculations on the case. There are also two other trials against activists, initiated again by Kronospan against other activists, because of the harm to their reputation and the spread of misinformation. They are actually still demanding money as a refund/compensation from this local initiative group.

About Kronospan’s lawsuit against the environmental NGO Ecoclub:

Ecoclub’s Letter of appeal with remarks to the EIA Report
https://bankwatch.org/wp-content/uploads/2020/04/Ecoclub_comments-for-the-EIA.pdf

ECOCLUB’S publication: The concentration of formaldehyde in Horodok will be exceeded 9 times – Ecoclub