Mega Sporting Events: the anatomy of a development disaster

On the opening day of the Finance in Common summit, there will be a special session on “Mobilisation of Development Finance for Sustainable Sport“, that will look at the role of public development finance in mega sporting events such as the Olympics. But can these events ever be sustainable? And should public development banks ever invest in this very controversial sector?

As many reports show, mega sporting events often lead to “mega-violations“: forced evictions, corruption, discrimination, police violence, retaliations against activists, threats and attacks against journalists, poor labour standards, exploitaton of migrant workers are all common issues in the context of events such as the Olympics or the World Cup.

In this op-ed, Mark Fodor (coordinator of the Defenders in Development campaign at the Coalition for Human Rights in Development) looks at the devastating human rights, environmental and social impact of mega sporting events.

You’ve just won your bid to host the Olympics – congratulations! You won the right to be the center of attention of this planet, to showcase – even show off – to the rest of the planet how you can do just as well as the last event. No, not just as well. You can do even better.

The date is set and now you have over six years to prepare. You get your team together – look at past experiences, bring in the best experts, draw up plans. Plans are set: start consultations, hire contractors, start building: everything will be ready with time to spare.

And then the consultations start. Some slum residents start protesting, as they are going to be forcibly displaced to make way for sporting venues, or for the roads and rails lines built to get to those venues. Environmentalists are speaking up because parks with some older trees need to be cleared. Outraged urban planners are complaining that it’s a huge waste of money: we’re going to develop local transportation infrastructure around huge crowds that will only be in town for two weeks and will be travelling between stadiums to areas of the city that are otherwise essentially empty. Local journalists and bloggers catch wind of what’s going on. They start to cover the issue. Their message: this is not what your city needs to develop.

Time is a bit tight and this might mean you have to redraw plans a bit. Maybe a bit more compensation, maybe show that venues will have a life after the events. You have to keep your eye on the ball: not let anything stand in the way. This doesn’t make you look good. Lucky you’ve got a few tricks up your sleeve. You double down on public relations. You also start reaching for other tools at your disposal.

The people just don’t get it, there are real development opportunities here. Many of the slums are on prime real estate. With the Olympics, you will actually be able to clear up those spaces, and develop newer, better and cleaner areas in the city for your up and coming middle class residents. Ok, so now it’s clear: not everyone is going to be happy with what you have in mind; and you don’t even have time to make everyone happy, anyway. Let’s focus on cleaning up the city and getting rid of the ugly spots. Let’s show the world what a great place this is.

The colossal effort to build everything for the two-week event involves mobilising all construction companies in your country. The laws of supply and demand start to kick in: they push their prices higher and higher, especially as the opening date approaches. New construction companies start appearing to help in the effort. Ideally you would only work with companies that follow the highest labour standards, but the effort here is too great, you need all companies you can find. There isn’t enough of a labour force in-country for this effort, several of the companies have started to put their hands on vulnerable migrant workers.

You manage to get it all together: the Olympics take place, and you are praised on the world stage for the event you just held. You showed everyone that you can do it. And what’s the tally? Vast amounts of funds drained away from real development needs, several times the astronomical amounts originally planned; large abandoned stadiums; a transportation system wholly inadequate for the city’s every day transportation needs; hundreds if not thousands of your city’s most vulnerable further marginalised – or even arrested in some cases. 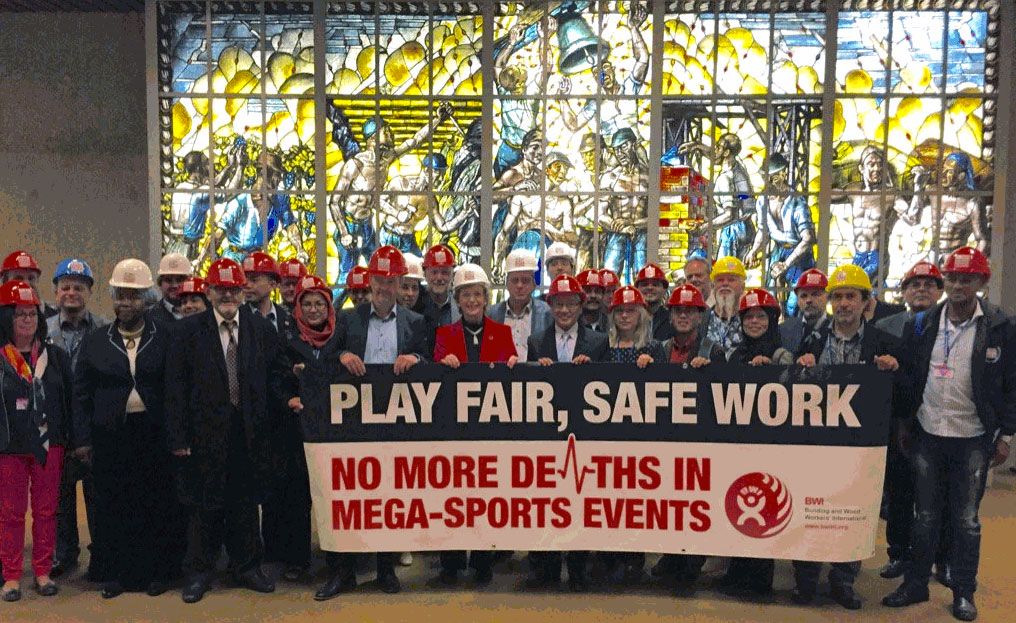 Migrant workers for the 2024 Qatar World Cup – who make up 95% of the workforce – have faced delayed, withheld and unpaid salaries, and cannot leave the country to find other jobs. They face appalling living conditions, often (illegally) aren’t provided resident permits, have passports confiscated, are threatened, and are faced with forced labour.

During the works for the 2016 Sochi Winter Olympics, there were huge arrears in payments to migrant workers, as well as forced evictions without fair compensation, threats and arrests of journalists and civil society activists, including those documenting environmental damage caused by the Olympics, and exploitation of migrant workers on Olympic venues and other construction sites.

The Rio Olympics in 2016 saw 6,600 families evicted or under threat of eviction in impoverished areas with the impossibility of return due to 60% of the Olympic Park area being subjected to condominium developments sold on the open market after the Games. Many of evictions were “flash evictions” with no prior warning, forcing relocation to lower-income areas which created further economic precarity and removed community ties. Inadequate compensation leading to debt was rife, as was physical violence and death threats to the displaced from government officials. The displacement also caused mental health issues and increased exposure to gang violence.

The run-up to the 2008 Beijing Olympics saw a surge in violations of free expression and association, and media freedom, as well as abuses of migrant construction workers and forced eviction of residents.

Human Rights Watch – Race to the bottom: exploitation of migrant workers ahead of Russia’s 2016 Winter Olympics Games in Sochi