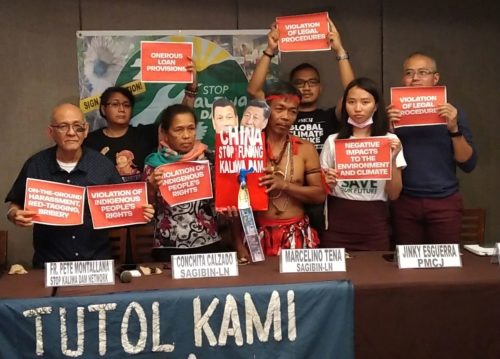 The Coalition for Human Right in Development members and partners submitted a position paper to the Asian Infrastructure and Investment Bank (AIIB) Environmental and Social Framework (ESF) Review team in line with the on-going review.  The AIIB requested submissions from civil society organizations, stakeholders and other interested entities for the Phase 1 ESF Review.

The Coalition have been engaging with the AIIB together with several members. The engagement is focused on advancing the policy recommendations from Uncalculated Risks: Threats and Attacks against Human Rights Defenders and the Role of Development Financiers. Uncalculated Risks was the global study conducted by the Coalition and members of the Defenders in Development Campaign. It provides measures and policy recommendations that will help avert, mitigate and prevent threats and reprisals against human rights defenders.

Myanmar’s nationwide civil disobedience movement (CDM), based on “no recognition, no participation,” is key to stopping the military from consolidating power after its 1 February 2021 coup d’état. Multilateral finance institutions (MFIs) must support the CDM, stating they will not deal with

International Accountability Project (IAP) released a new set of community guides to help communities conduct their own research and in the process define their development priorities and aspirations. The “Community Action Guide on Community-Led Research” set of 3 booklets provides clear an

Civil society representatives from Latin America and the Caribbean participating in the Extractive Industries Transparency Initiative (EITI), held meetings from 28 to 30 November 2017 in Santo Domingo – Dominican Republic in the framework of the “EITI Regional Workshop in Latin

Communiqué from the Development and Investment in Africa Workshop

12-13 NOVEMBER 2017 PRETORIA, SOUTH AFRICA This is a communiqué reflecting the outcomes of the Development and Investment in Africa Workshop held on 12-13 November 2017 in Pretoria, South Africa, and organized by the Coalition for Human Rights in Development together with African Coalition for

On September 26, 2017, the Coalition for Human Rights in Development co-hosted a ‘Demystifying Development Banks’ webinar with a special focus on Asia, where many countries have been shown to be among the most dangerous for human rights and environmental defenders who confront infrastructure

Presentation: The Private Sector in Development

Coalition Coordinator, Gretchen Gordon, recently participated in a webinar hosted by the CIVICUS World Alliance for the launch of their report, ‘State of Civil Society 2017.’ Gordon’s presentation, based on her guest essay accompanying the report, focused on how the private sector is playing a

Read the full report: English | Spanish | French Partnering with Communities to Defend Human Rights In 2016 the Coalition engaged in partnerships with communities around the world to connect community struggles with strategic resources and campaign support and to bring community expertis

Time for Development Financiers to #Standup4HumanRights

Global groups call for action to protect human rights in development Ahead of Human Rights Day, December 10th, the Coalition for Human Rights in Development joins with over 50 civil society groups around the world to call on financial institutions, governments and businesses to stand up for human

In an opinion piece in Foreign Policy magazine, Maina Kiai, UN Special Rapporteur on the rights to freedom of peaceful assembly and of association, explains how the goal of sustainable development is under threat from growing restrictions on public participation in development and closing civ

As government officials from Brazil, Russia, India, China and South Africa wrapped up proceedings in Shanghai for the first Annual Meeting of the BRICS New Development Bank (NDB), development and environmental groups from BRICS countries called for greater transparency and engagement with ci

As government ministers from Brazil, Russia, India, China and South Africa gather in Washington, DC for the third board of governors meeting of the BRICS New Development Bank (NDB) April 13 and 14, civil society groups in BRICS countries appealed to their governments and NDB management to operate

Amnesty International argues that the recently launched Asian Infrastructure Investment Bank (AIIB), led by China, should draw on the experience of other development banks and implement strong human rights standards. The group raises concerns that the Bank’s development of an Envir

Over 180 civil society organizations from Latin America and the Caribbean call on their governments to prevent a weakening of human rights and development standards at the World Bank. The World Bank is presently holding consultations with its member State governments on a proposed revision of it

Civil society groups around the globe call on the World Bank to hold robust in-country consultations on its proposed new safeguard policies. Read the letter here.