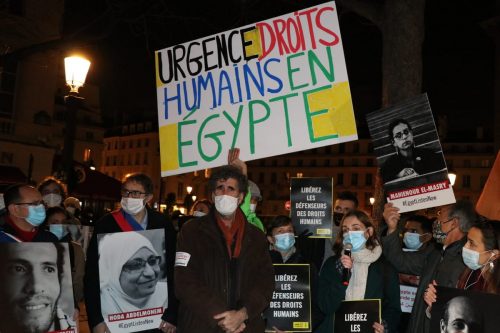 On 15 April 2021, on the 30th anniversary of the European Bank for Reconstruction and Development, over 25 civil society organizations addressed a letter to the Bank, urging it to put human rights issues at the top of the agenda when discussing the next Egypt country strategy and during the upcoming visit to Cairo. You can find the CSOs’ letter below and here you can download EBRD’s response to the letter.

Egyptian government-aligned media reported that you will be visiting Egypt in the coming weeks. During any such visit, we 26 civil society organisations urge you to convey to the Egyptian authorities that the country’s worsening rule of law and human rights abuses represent non-compliance with the political aspects of the EBRD’s mandate and constitute a major problem for the Bank that should be addressed urgently and seriously. This would be consistent with the core message and policy options within the EBRD’s Procedures to Implement the Political Aspects of the Mandate (updated 2013) and the 2018 Addendum. We recall two objectives the Addendum defines for the EBRD’s operational approach to address compliance challenges: “Demonstrating a firm commitment to the Bank’s political character” and “Maximising its impact and leverage”.

As civil society organisations, we hold the EBRD’s mandate on multiparty democracy and pluralism, reflected in Article 1 of the Agreement Establishing the Bank, in high regard as a very important element distinguishing the Bank from other financial institutions. This positions it as a key potential contributor to the upholding of democracy, the rule of law and human rights, as does its “more for more, less for less” policy as an important lever to encourage countries of operations to make progress on reform and end abuses.

The Bank’s Procedures Paper includes 14 benchmarks to assess the situation—and progress—in countries of operation, with respect to the Bank’s political principles. Yet Egypt has demonstrated a dramatic, measurable regression since the last EBRD strategy for Egypt (published in 2017) on almost all of these benchmarks, in a major diversion from the Bank’s policies and values. The severe, continuous deterioration of its human rights, democracy and rule of law situation has provoked four European Parliament urgency resolutions in three years, the latest in December 2020, a rare joint statement from over 30 states at the United Nations Human Rights Council in 2021, an overwhelming number of statements from UN human rights experts and agencies, and alarming US State Department reports on Egypt every year.

Your visit this spring will coincide with the Bank’s preparation of its next country strategy for Egypt. The worsening of the country’s non-compliance should be on your agenda, as well as that of the Bank’s management. Egypt was the EBRD’s largest country of operations in 2018 and 2019, even as the Egyptian authorities have deliberately and visibly rolled back the rule of law, separation of powers and what remained of democracy, while continuing to fuel an ongoing, severe and pervasive human rights crisis. We also note current legislative threats to women’s rights and civic freedoms, and the lack of substantive progress in Coptic Christian rights to freedom of religion and equality, though the Egyptian government has often highlighted these issues as areas of progress. UN Special Procedures recently warned again that evidence “indicates a systemic problem with human rights protections in Egypt, as well as a systemic problem in the abuse and misuse of counter-terrorism laws and practices.” Thousands of political activists, human rights defenders, academics, gay and trans people and LGBT activists, journalists and bloggers have been arrested and kept in lengthy detention without trial. There is no space in the country to make any criticism without the risk of being labelled as “terrorist” and prosecuted as such. Egypt has witnessed a drastic rise in the most serious human rights violations, including a sharp increase in the number of death sentences and executions: Egypt remains fifth in global rankings of States by the number of executions carried out. Most of these death sentences come within cases marred by a series of other severe human rights violations, including mass arrests, enforced disappearance, confession under torture, prolonged pre-trial detention, unfair mass trials, and trials of civilians by military courts.

The Egyptian authorities and intelligence agencies have taken near-complete control—except for a couple of small online news outlets—of the media field inside the country, allowing them to ensure there is no critical reporting on the Egyptian authorities’ own version of the “more for more, less for less principle”. It consists of more reprisals toward independent civil society actors, democratic activists and human rights defenders, as well as more closing of civic space and the public sphere, and less online and offline freedom of speech and of the press. Since 2016, Egypt has ranked among the top three countries worldwide each year in the number of journalists behind bars. Hundreds of news and human rights websites have been blocked since 2017. During the pandemic, dozens of health workers, human rights defenders and media workers were arrested or intimidated for speaking up about the COVID-19 situation and the State response. During the pandemic, the authorities excluded the thousands of political prisoners, including scores of human rights defenders, from the—limited and insufficient—prison decongestion measures taken; instead, they detained others, treating real or suspected dissent as a national security threat.

In this context, civil society, journalists, defenders and the business community run a very real, high risk of harsh reprisal, including enforced disappearance—which is usually associated with torture and abuse—and long arbitrary detention for any frank discussion with the EBRD of Egypt’s political, governance and human rights situation. This clearly affects the Bank’s ability to consult them and thus, collect accurate data to assess the situation. Therefore, we have urged the EBRD to take special measures, in line with their statement on retaliation against civil society and project stakeholders to ensure the safety of such stakeholders from retaliation, as it consults them during the process of work on the next strategy on Egypt. This should include engaging with stakeholders to discuss how best to keep them safe during, throughout and after, the consultation process. The EBRD’s Civil Society Engagement Unit will need high-level support, including from yourself and the Board, to take adequate measures. The EBRD should be prepared to have a swift and decisive response, using all available leverage including financial, to any reprisals that occur.

The authorities’ disregard for human rights and democratic governance not only violates Egypt’s national and international legal obligations and the EBRD’s established values, it can also materially undermine Egypt’s economic development and efforts to sustainably grow its economy while combatting skyrocketing poverty rates. Transparency International warned that the lack of checks and balances on presidential power in Egypt can result in “state capture and kleptocracy”. Due to the military’s overwhelming presence in the political and economic sectors, there is a severe lack of transparency and practices favouring government-tied enterprises are extensive, deterring domestic and foreign investment by other civilian enterprises, according to Bloomberg. Repression of the press and of criticism of government policies has built up barriers to growth, experts have explained, by silencing corruption watchdogs and dissenters.

Most growth in Egypt outside of tourism and natural gas exploration has been fuelled by debt-driven government stimulus that privileges businesses owned by, or with close connections to, the military. FDI outside of oil and gas sectors has often been weak, dipping as low as $400 million in the first three months of 2019.  The rising poverty and other violations of economic and social rights, as the state further closes civic space, was already resulting in social unrest and major protests against corruption and government policies even before the COVID-19 pandemic began.

Thus, the acute deterioration of democratic governance and human rights in Egypt is closely interlinked with and could increasingly lead to negative impacts on the economic, social and financial situation and diminishes the country’s resilience. This cannot be dissociated from the economic realm: to genuinely have a positive impact on the second, international actors like the EBRD must address the first. Hence, to protect the investment of over 7 billion euros of EBRD funds in Egypt to date, an investment of political capital is now required. We urge you, therefore, to take stock of the trajectory taken by Egypt since it became a country of operations in 2012, in a phase when there were high hopes for of democratic reforms, and to engage the Bank in addressing the fact that Egypt has been drastically derailed into a phase of entrenched authoritarianism. In order to meet the requirements of the EBRD’s multiparty democracy and pluralism mandate, the Egyptian authorities in particular—as well as similar governments around the MENA region—must show clear and measurable commitments toward ending the implicit and explicit violation of the Bank’s reform benchmarks.