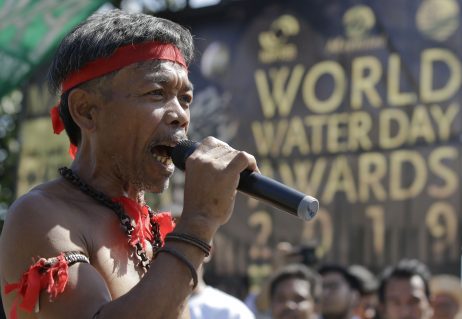 The lush forests of the Sierra Madre mountain range, on the Philippine island of Luzon, have been home to the Dumagat-Remontados indigenous peoples for centuries. But their ancestral lands are now under threat. In this area, the Philippine government is planning to build the Kaliwa Dam, despite environmental concerns and opposition from local indigenous communities at risk of being displaced and losing their livelihoods. In 2009, the Dumagat-Remontado – with the support of the Save Sierra Madre Network Alliance (SSMNA) – had successfully stopped the construction of the Laiban mega-dam  through a public campaign and legal actions. But under President Rodrigo Duterte, the project was scaled down and last year it secured a dubious environmental compliance certificate and a $211.2 million loan from China Exim Bank.

Since then, militarization in the area has increased. When the pandemic hit, the situation became even worse, as the heavy presence of police and the military due to the lockdown made it doubly hard for the local people to move freely in their land. In March, a member of the Dumagat-Remontado community was abducted and physically abused while in custody. As denounced by the SKDN, this was the latest episode in a context of continuous violence, unreasonable use of force, threats, and harassment by the military.

Across Southeast and South Asia, indigenous peoples and local communities – who were already severely impacted by development projects such as dams, agribusiness, or mining activities – are now facing additional challenges due to the COVID-19 emergency.

You can read the full article – written by Carmina Flores-Obanil (Asia Regional Coordinator of the Coalition for Human Rights in Development, with contributions from some of our partners in Southeast Asia – in The Diplomat.

COVID-19: You can’t have a recovery using the same bad medicine

We are beginning 2022 with the world reeling under rising Omicron cases. It has been two years since the World Health Organization declared the coronavirus a public health emergency of international concern. And we still have pressing questions around how we shepherd ourselves out of the pande

A COVID-19 Loan for COVID-Denying Turkmenistan

The World Bank approved a COVID-19 loan for Turkmenistan, despite journalists reporting on the pandemic there being thrown in jail.

May 18, 2020 – In a statement published today, the Coalition urged development finance institutions to ensure that the funding and support they provide for the Covid-19 response, and during the economic recovery period, upholds human rights and leads to economic justice for those who are m

Join the Defenders in Development Campaign!

Around the world, as megaprojects and investments are imposed on communities without their consent or consultation, those working to protect their lands and resources, fight corruption, and defend human rights are under increasing attack.   For this reason, the Coalition for Human Rights in

Civil society representatives from Latin America and the Caribbean participating in the Extractive Industries Transparency Initiative (EITI), held meetings from 28 to 30 November 2017 in Santo Domingo – Dominican Republic in the framework of the “EITI Regional Workshop in Latin

Communities affected by the Tanahu Hydropower Project, which includes damming the Seti river in Nepal, recently submitted a 26-point memorandum to Nepal’s Energy Minister, stressing concerns regarding the project’s impacts on their traditional lands and livelihoods and failure to co

Crude Accountability and civil society groups around the world are calling on the Directors of the European Bank for Reconstruction and Development (EBRD) to reject financing for an oil and gas project in Turkmenistan. The $30 million loan to Circle Maritime Invest (CMI) for the CMI Offshore proj

Another anti-dam activist has been murdered in Latin America. On Tuesday, January 17, protestors led a peaceful demonstration against a hydroelectric plant in Guatemala. But the event ended in death after paramilitaries shot and killed 72-year-old activist Sebastian Alonso. The march had ori

Coalition member Forest Peoples Programme has released a report on the impacts of deforestation and forest degradation on indigenous and local communities in the DRC, highlighting the human rights violations and socio-environmental impacts often caused by these activities. The report also c

Indigenous Peoples in Crosshairs of Development

Peter Bosshard, interim ED of Coalition member International Rivers, explains how indigenous communities are particularly at risk of landgrabbing and face increasing repression, even death when standing up for their rights. Read the article here.

In a victory for indigenous and human rights activists, the Central American Bank for Economic Integration (BCIE) announced Friday the suspension of its financing of the Agua Zarca Dam. The Honduras dam project has been a focal point for international attention following the killing of h

Follow this action alert to tell FMO, Finnfund, CABEI, Voith and Siemens to immediately pull out of the Agua Zarca Dam and to not get involved in any other projects on the land of the indigenous Lenca people. intlrv.rs/StopAguaZarca.

The Coalition for Human Rights in Development expresses our deep sadness and outrage at the assassination this week of indigenous leader and environmental activist Berta Cáceres. Berta was the coordinator and co-founder of the Council of Indigenous Peoples of Honduras, COPINH. She fought to d

For World Bank, Ignorance is Bliss

The World Bank doesn’t require that its projects respect human rights, and has thus far refused to adopt such a requirement. Máxima Acuña de Chaupe and Elmer Campos travelled far from their families in rural Peru to attend the Annual Meeting of the World Bank, taking place in the capital city of Lima.

UN Special Rapporteur on Freedom of Assembly and Association 2015

Dr. Jim Yong Kim, President, World Bank January 30, 2015 Dear Mr. President, We are the Requesters, Anuak refugees and asylum seekers based in Kenya (Dadaab, Kakuma and Nairobi) and South Sudan (Gorom), who submitted a complaint to the World Bank Inspection Panel in September 2012. We have written