Pulling the ‘cotton’ over Uzbek eyes at latest EBRD investment

On 10 February 2021 the EBRD expects its Board of Directors to approve a loan of USD 70 million to Indorama Agro for the development of the cotton farming sector in Uzbekistan.

According to the bank, the project is expected to strengthen competitiveness and enhance economic inclusion, especially for young people and women in rural areas. Moreover, it “helps the company achieve higher environmental standards” similar to the Better Cotton Initiative for sustainable cotton farming in Uzbekistan, whose industry is notorious for violating the rights of workers. However, the expected transition impact of the project is not even Good (ETI score: 57), while the investment is quite significant. And what does a reality check show? Confiscations of farmers’ land, poor working conditions and job cuts, unfair payment, harmful technologies and ongoing reprisals against staff for voicing their complaints and whistleblowing give cause for alarm.

In 2018 Indorama Corporation, a Singapore-based multinational, established Indorama Agro to grow the cotton. The intention is to produce its own cotton for Indorama Kokand Textile, operating in Uzbekistan since 2011. Moreover, Indorama Kokand Fertilizers and Chemicals is expected to start production of fertilisers for cotton farming in 2021. Thus, Indorama will be one of the largest vertically-integrated cotton farms in Uzbekistan, operating 75 000 hectares of land and dominating the export of spun yarn, including to Europe.

In 2020, the EBRD approved USD 22.5 million loan to JSC Indorama Kokand Fertilizers and Chemicals, and now it considers approving another US$70 million to the same corporation. While the bank has rejected concerns about monopolistic trends in agribusiness in Uzbekistan raised by local Radio Free Europe subsidiary Ozodlik, EBRD investments in Indorama Agro alone will exceed the overall EBRD funding for agribusiness in Uzbekistan.

2,897 cotton farms operated in the area of project footprint before. Indorama Agro claims that the acquisition of 1,068 farms happened via voluntary termination of land lease agreements. Farmers interviewed by Ozodlik have claimed that some lease terminations were not voluntary. The EBRD, in its response to Ozodlik, said that no evidence has been found that the land lease agreements were terminated under duress, and the company offered jobs to all farmers.

However, the NGO Uzbek Forum found that land was transferred to the company with no regard for the long-term leases that farmers had with local administrations and without any compensation from the state for the unilateral termination of their land leases. In cases where farmers were able to reclaim the right to lease their land through the courts, the local hokimiyat refused to implement the court’s decision, acting solely in the interests of Indorama.

For rural people in Uzbekistan, land is the only source of income, food and employment. Below are excerpts from interviews conducted by Uzbek Forum with former farmers and Indorama employees. People requested anonymity due to fear of reprisals, as many of them are still employed there. 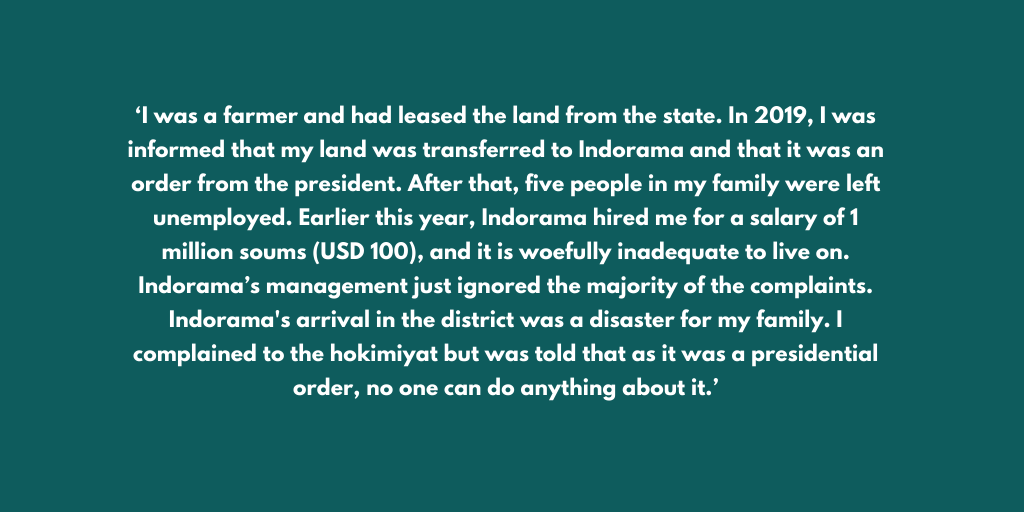 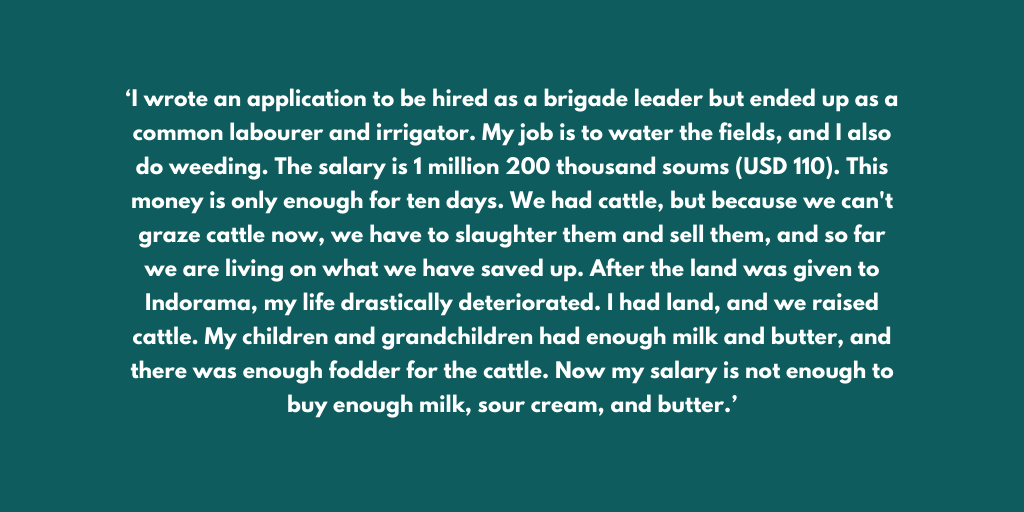 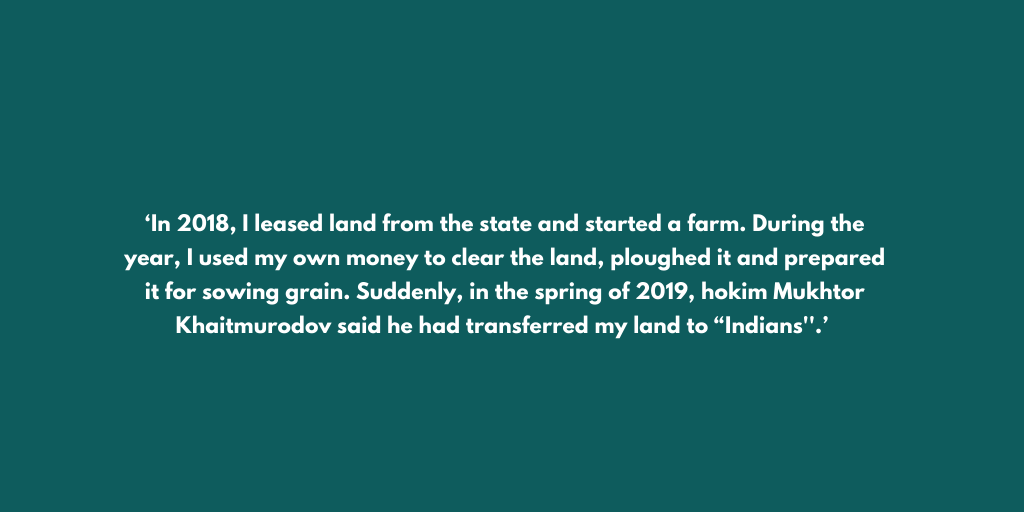 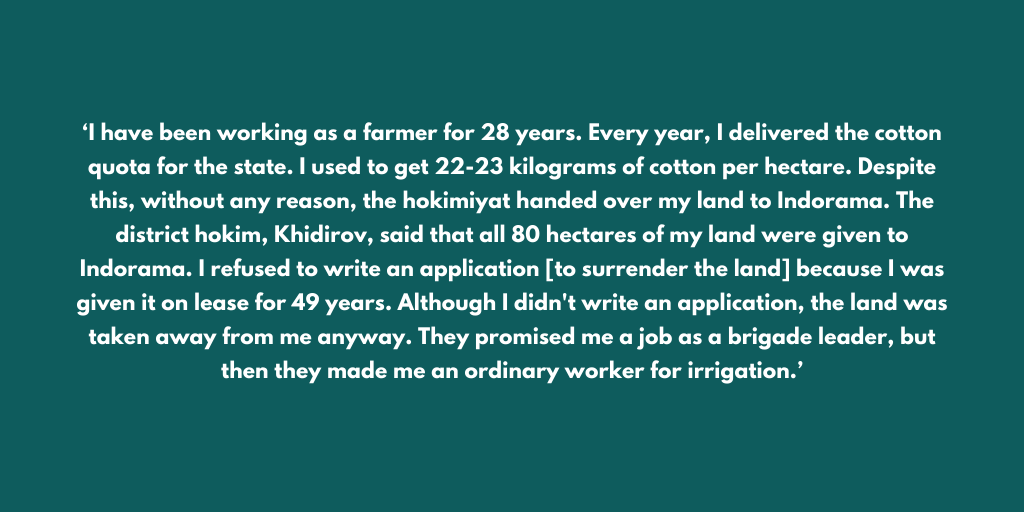 According to a local official in the Kasbi district, the number of unemployed people and those in need of social assistance had tripled in the last two years. Many farmers lost their land when it was transferred to Indorama following the apparently ‘voluntary’ land lease terminations.

Indorama forbids the use of small plots of land for cultivation by the local community. Local people who annually rented a small plot of land from farmers to grow vegetables for food and sale have lost valuable income and sustenance as a result. Indorama also does not permit cattle to be grazed or the collection of cotton stalks for firewood. Combined with a loss of income, the official believes that the most vulnerable in the rural population are at risk of starvation.

Moreover, the entire project aims at the mechanisation of the cotton sector, which will result in massive job losses. According to the limited data of Indorama, around 4337 permanent and 9070 seasonal workers may have been affected in Nishon, Sardoba, Kasbi and Oqoltin districts. As a way to compensate the livelihood loss, the company proposed to plant mulberry trees as part of a Community Asset Programme, with a view to improving local income by generating opportunities in silk cocoon production.

However, the silk sector remains highly controlled by the government, which questions the benefits to farmers and rural communities. Uzbek Forum has in the past reported on abusive practices in the silk sector, which depends highly on forced labour and exploits the vulnerability of farmers and the rural poor. In many cases, Uzbek Forum monitors found that the government underpays or fails to pay producers upon delivery of cocoons.

Indorama Agro confirmed hiring 2 720 people out of 13 407 who might have lost the jobs. However, there is a range of evidence of poor working conditions, unfair payment, gender discrimination, fraud and corruption. Indorama employees, interviewed by Uzbek Forum, told us that the workers are forced to stay in the fields in all kinds of weather with no shelter from freezing cold and scorching heat or a place for workers to rest. They report that they are forced to work over and above their contractual obligations with no extra pay.

Moreover, people complain that they have been retained on seasonal employment contracts even though they are employed year-round. This effectively means that they are not eligible for sick or holiday pay and have no security of employment. Multiple cases of bribery requested from people in order to ensure employment at Indorama were also reported. 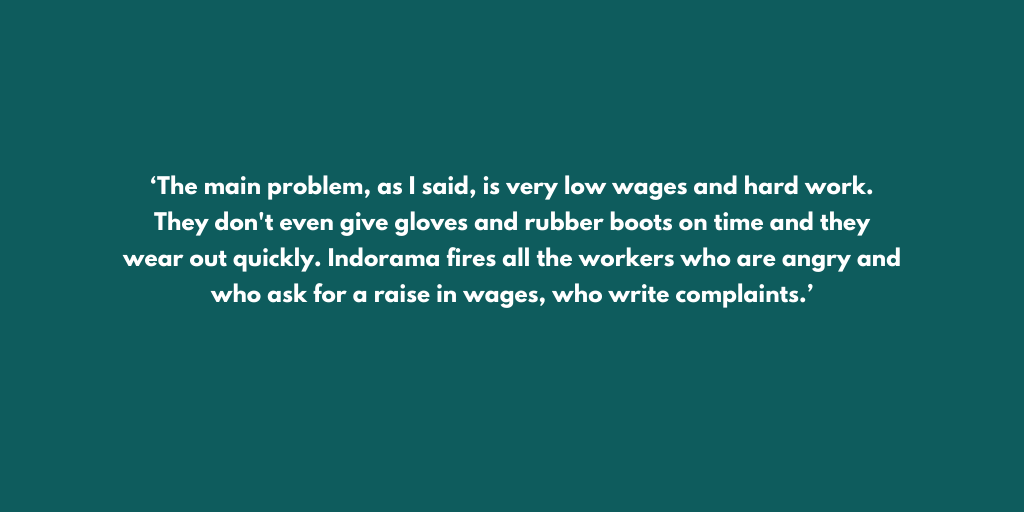 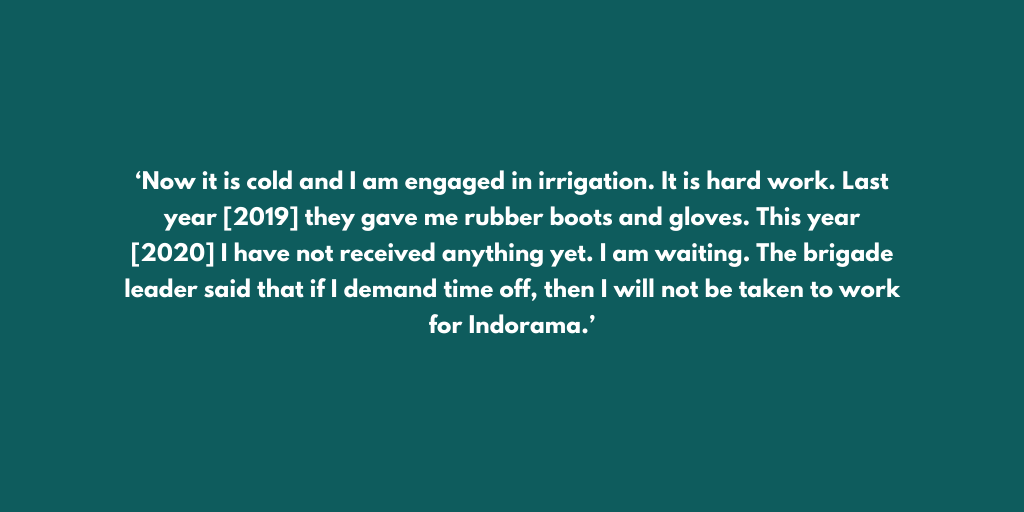 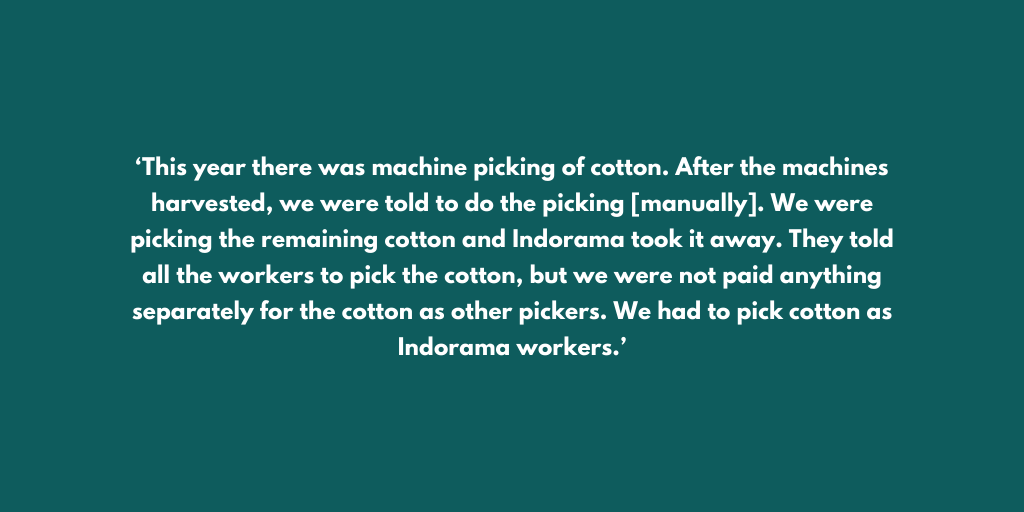 In June 2016 a coalition of NGOs on behalf of Uzbek victims of human rights abuses submitted a complaint to the Office of the Compliance Advisor Ombudsman (CAO) at the World Bank related to Indorama Kokand Textile. The claim raised concerns about the existence of forced labour in IKT’s supply chain.

In April 2018, CAO received another complaint related to the operation of Indorama Eleme Fertilizer and Chemicals Ltd. in Nigeria from its employees raising a series of concerns regarding the company’s labor and working conditions and use of security forces.

Uzbek Forum has documented other cases where Indorama employees have been fired or received threats for speaking out about labour rights violations. One recent case involves Roza Agaidarova, who worked as a materials accountant in the company’s warehouse. She claims she was fired after she discovered a shortage of chemicals worth approximately USD 3 million and a violation of reporting procedures. After informing management, she became the target of allegations of theft and received threats that she would be sued. Indorama Agro has since filed a lawsuit against her for allegedly stealing diesel and disclosing information about fraud in the company in an interview she gave to Ozodlik.

It is important to underline that the entire public consultation process on the environmental and social impact assessment  for the Indorama project took place during the ongoing COVID-19 pandemic . But the company decided to engage stakeholders online, which is very limiting especially for rural communities due to limited internet access and project documentation.

Farmers and employees reported that cotton yields on farms operated by Indorama have fallen significantly in the last two years. They believe that this is due in part to the overuse of chemicals and pesticides coupled with a basic lack of understanding on the part of Indorama’s management of the ecology of the land.

‘Before Indorama got land in our area, the land yield was at least 20 centners of cotton per hectare. In 2019, the yield rate on Indorama land was 11 centners per hectare. This was explained by the fact that the company is new and that they do not have specialists who understand local conditions. In 2020, the yield was only 8 centners per hectare. Now they justify low yields through flooding. But yields also fell sharply on those lands that were not affected by the flood.’

According to Indorama Agro, the company intends to apply over 1.5 million liters of pesticides, some of which are not approved or highly restricted in the EU.

Moreover, the use of glyphosate at such scale raises serious concerns in light of recent scientific literature confirming its carcinogenic, endocrine-disrupting and genotoxic properties. Several epidemiological studies have linked exposure to glyphosate with non-Hodgkin’s lymphoma, hairy cell leukaemia, multiple myeloma, DNA damage, parkinsonian syndromes, autism, etc. In 2015, the World Health Organization’s International Agency for Research on Cancer (IARC) classified glyphosate as ‘probably carcinogenic to humans’, which means that there is sufficient evidence of carcinogenicity in experimental animals but limited evidence in humans.

Although glyphosate is an authorised product in the EU and globally, many countries impose restrictions on its use in public spaces or have committed to do so in the near future. Italy and France have already introduced such restrictions, as have local authorities in Belgium, Canada, the UK, New Zealand, the USA, Spain and Australia. Moreover, there is a range of ongoing revisions of existing regulations due to newly received evidence of health risks or gaps in previously made risks assessments. Despite the fact that glyphosate is currently approved for use in the European Union until the end of 2022, Germany and France announced that they will begin phasing it out. In 2020, Luxemburg announced it would terminate the use of glyphosate in 2021.

There is also an increasing social movement to stop the use of glyphosate. In 2017, over one million citizens called on the European Commission ‘to propose to Member States a ban on glyphosate’. Moreover, thousands of people have filed lawsuits against the Monsanto Company (now Bayer) alleging that exposure to the glyphosate-based herbicide Roundup caused them or their loved ones to develop non-Hodgkin’s lymphoma. In June 2020, the company announced that it would pay over USD 10 billion to resolve these claims. In 2018 and 2019, Monsanto was ordered to pay USD 2.2 billion to people that got cancer after using Roundup.

Apart from glyphosate, other pesticides, including propargite and chlorpyrifos, are not approved for use in the EU mainly due to the risks they pose to the environment and human health. Imidacloprid is approved only for use in permanent greenhouses, particularly due to its high risks for bees.

Such impacts of pesticides are already present in Uzbekistan: after the depletion of the Aral Sea, pesticide and fertiliser residues left on the dried surface are blown into the surrounding region in toxic dust storms. An investigation made by the Environmental Justice Foundation in 2005 discovered that in some areas of Uzbekistan, around 50 per cent of deaths were from respiratory illnesses such as pulmonary tuberculosis, obstructive lung disease and bronchial asthma. Moreover, cancer rates in these areas were abnormally high, with residents of the Karakalpakstan region, located close to the sea, suffering the most.

For these reasons Uzbek Forum and CEE Bankwatch Network are calling on the EBRD to suspend approval of the loan to Indorama Agro until the company ensures the protection of human rights, and to prevent retaliation against current and former employees of Indorama Agro based on their right to raise concerns.

Lorena Cotza
Previous Post:
Why I joined the coalition: we need collective power to bring about change
Next Post:
Q & A with Tshimpidimbua Dieudonne, CRONGD’s Executive Secretary (DRC)
no comments