This blog was written by Saswati Swetlena and Sreedhar Ramamurthi, who work for our member organization Environics Trust (India). 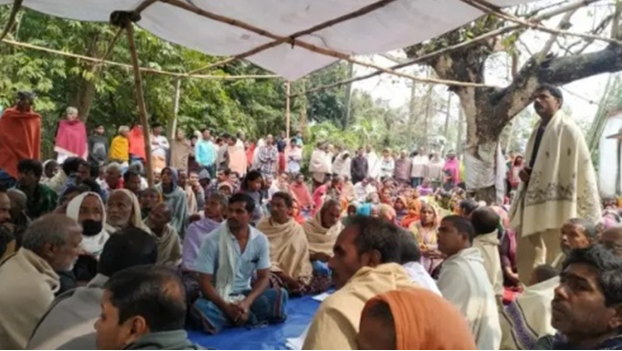 The “Posco Pratirodh Sangram Samiti” movement is legendary. For 12 years, in the Jagatsinghpur district of Odisha (India), they have put up a stiff resistance against the South Korean steel-making giant POSCO. In March 2017, they managed to force POSCO back off: the company had to hand over to the Odisha government the land they had acquired.

The struggle, however, continues. In the same location, the Jindal Steel Works (JSW) group is trying to develop another steel plant complex, which is being met with equally strong resistance. This so-called “development project” will heavily impact tribal, fisherfolk and farming communities across the state.

The Indian government, despite the opposition of local communities, has used its status of “eminent domain” to invite JSW, an Indian-based multinational corporation, to set up a new mega-project: an integrated steel plant, with an associated cement grinding plant, captive mines and power plants, that will produce 13.2 metric tonne per annum (MTPA) of crude steel.

With the aim of ensuring transparency and fairness, In 2013 the Indian government replaced the 1894 Land Acquisition Act, a legacy of the colonial times. According to the new law, the State has to return back land which is acquired for public purpose if within five years the public purpose is not served.

The State government’s decision to take the POSCO acquired land under its “landbank” is a distortion of the law, and therefore it purports to be illegal. The community has had to come back to ground zero and the movement renamed itself as the “Anti-Jindal Anti-Posco movement”.

The impacts of such a humungous project will not only be in the area where the plant is being developed, but in the wider region. The livelihoods of the local residents, mainly farmers and fisherfolks, heavily depend on their betel vineyards, cashew plantations and the fish caught in a creek in the Bay of Bengal. Most inhabitants are Adivasi, and the project has violated their right to Free, Prior and Informed Consent (FPIC).

There are also thousands of villagers whose forest rights have not been settled and they would be heavily impacted by this project. Most importantly, there is an upfront violation of the environment clearance procedure, which has not been recognised by the environment ministry and the expert committee. Moreover, the affected villagers are still facing intimidation and repression from the local administration.

Despite facing these insurmountable challenges, dirty tactics and divisive politics from the administration (that for example is trying to create conflicts between different villages), the movement has been successful till date in delaying the JSW project, on the grounds of its faulty environmental impact assessment and unfair public consultations. They are now mobilizing other communities across the region and they have been sitting on dharna ( in protest). They won’t stop their protest till their demands are met and the project is withdrawn. In a letter submitted recently to the Collector and District Magistrate, the villagers made it loud and clear- “For the last 20 years, we have been trying to protect our lives and livelihoods by safeguarding our forest land, which we have been dependent on for the last 200 years. We are clear on our stand that ‘We don’t want any industry on our land’, that may be POSCO in 2001 or JSW in 2021. The forest land is our only bread and butter, and we will not tolerate illegal diversions of the same which we have already conveyed through our strong demonstration during the proposed POSCO India project earlier.”

Environics Trust continues to stand in solidarity with the movement!

Lorena Cotza
Previous Post:
Tity’s blog: why I joined the Coalition
Next Post:
The Community Resource Exchange: learning as we create together
no comments